As told by loving parents Leroy and Mary Abeyta

Warren entered into this world on February 4th, 1970. Warren was born to Leroy and Mary (Baca) Abey 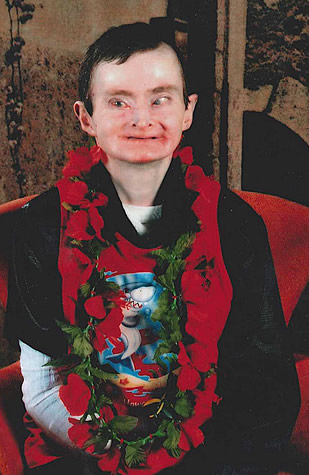 ta in Colorado Springs, Colorado. My husband Leroy and I remember when he was born. The doctors told us that Warren was born with Epidermolysis Bullosa. He also said that children born with this disease only live to around 15 years old. My husband and I had no idea what Epidermolysis Bullosa was or how to care for Warren. Warren was in the hospital for 30 days after he was born. I had to learn to care for him before we could bring him home. Not being able to bring my baby home from the hospital when I left was one of the saddest days of my life. Warren was also born with a dislocated hip and knee. So he wore a cast for a few months making care a bit more challenging.

My husband Leroy and I learned as we went along how to care for Warren. Warren was treated no differently from other children. Family and friends accepted him the way he was and loved him. Warren started out in a Special Ed class but was integrated into a regular classroom when he was in first grade. Warren was very intelligent and excelled in school. He graduated from Doherty High School in 1988. Warren received many academic awards while in school, including two Outstanding Achievement Awards signed by President Ronald Reagan.

Once Warren graduated from high school, he decided to attend the University of Colorado, Colorado Springs. Warren majored in Computer Science. Warren loved computers and programming. At the same time, Warren was accepted into an internship program. He worked for Hewlett Packard for two years as an intern engineer. He was very proud to have worked for Hewlett Packard where he wrote and implemented a computer program to run a robot.

Warren then attended Travel Trade School because he knew we loved to travel. He graduated 2 nd in his class. Warren was a successful travel agent and did a great job for everyone. He was meticulous, never leaving out the smallest details. Warren loved to travel. We went everywhere together as a family. Our travels took us to many places in the world including several trips to Europe, the Caribbean and across the United States. Warren loved meeting people and socializing with people. He inspired and touched many people in his travels. There were stares and questions at times, but once a person talked to Warren, they were amazed and touched by his courage and good attitude. Warren met many people during our travels including some famous people. We have many cherished memories and pictures.

Once, when we were on a cruise, we met the little girl named Grace who was traveling with her family. Grace was also born with Epidermolysis Bullosa. Warren spent some time talking to Grace and her family while we were on the cruise. It was as if Warren was meant to meet this precious little girl. What are the odds of meeting someone like Grace on a cruise so far away from home? We believe Warren stood for hope since he was quite a bit older than Grace.

Every day and month Warren was here on this earth were very important to him. Warren lived to be 41 and a half years old. Despite the odds against him and all his challenges, he never let it get him down. Together as a family we learned how to care for him. Warren accomplished many things during his lifetime. He once won a contest for playing the drums. Warren loved music. He was an avid music lover. He loved all kinds of music and loved to participate in Karaoke. Warren loved music so much that he became a part time DJ going under the name of DR JAMS. My husband and I adapted the DJ equipment so Warren could use it and we were the set up crew.

Warren also loved the Dallas Cowboys, Chicago White Sox, Los Angeles Lakers and New York Yankees. We traveled to Texas Stadium and the new Cowboys Stadium many times so that Warren could see live games. Warren got to meet a few famous football players during our attendance at the games. Warren also was very quick with the wit. He often made people smile or laugh with some of the things he would say or do. I often told him that he missed his calling to be a comedian.

Through his life, Warren endured many surgeries. Having his teeth removed, a hand amputated due to skin cancer and some of his fingers removed due to skin cancers. His eyesight was also bad. We learned to adapt to these challenges, grinding his food for him to eat. His dad mad special tools for Warren to use to type and do other things that for most people are routine. With Warren’s input, we tried to meet these challenges. Warren never gave up which is a testament to his life.

Warren entered eternal life on August 11, 2011. Warren counted every day as important, always counting the half year. Therefore, Warren was 41 and ½ years old. Warren lived life to the fullest. He taught us many lessons in life and was the joy of our life. Two of the most important lessons we learned from Warren was to live life to the fullest, and to cherish every day as if it was our last. Warren asked me one day, “Mom, why am I still here?” I responded to him that he had a purpose in this life. He said, “What is that purpose?” “I don’t know what that is.” I explained to him that I believed that his purpose in life was to go where the Lord sent us and to meet as many people as we can so that they could appreciate what they had and that although they had problems in their lives, someone else has it a little harder.

Warren always hoped they would find a cure for Epidermolysis Bullosa during his lifetime. Always reading and doing research on the latest developments. However, this was not to be. We must continue working to find a cure for this disease in the name of all the people who have died fighting to survive.

Warren loved socializing with family and friends. Those that met Warren will never forget him.

Here is a poem I wrote for my son which I read at the interment. 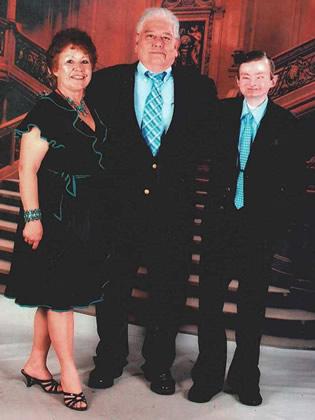 OUR ANGEL SON
By Mary Abeyta

The day you were born was the happiest day of our lives,
Though there were challenges day after day, the joy and happiness
you brought were always outweighed.
Years flew by and you became a man
Making us proud as was God’s plan
Never wavering in your courage and pride
Taking all obstacles and challenges in stride.
Day after day you brought us happiness and joy
Giving us more out of life than we ever hoped to enjoy.
The love that you gave to all that you met,
will never be forgotten as your sun sets.
So, my angel fly towards the heavens above
where Jesus awaits you with all his love.
The next time we see you and it won’t be too long
You will be part of God’s choir singing angelical songs.
So until we meet again in heaven afar
sleep tight my angel and we will watch for
That ever shining star.

© Copyright 2022, debra of America, All Rights Reserved | The Dystrophic Epidermolysis Bullosa Research Association of America, d/b/a debra of America is a registered 501(c)(3) tax exempt organization. | All Trademarks and Brands are Property of Their Respective Owners. debra of America does not endorse any drugs, tests, or treatments that we may report. This website is for informational purposes, always check with your physician before adopting any medical treatment. | EIN: 11-2519726